The Most Common Misspelling

The internet is a great place to laugh and poke fun at the grammatical abilities of its denizens. Not that I claim to be such an expert; I just enjoy the occasional entertainment at someone else’s expense. While some, like “you loose” and “your a …” are just plain annoying, there is the odd gem like cereal killer (that link is from FAIL Blog’s Burn of the Week, which has been a bit of a regular for classic grammar blunders).

Fortunately for the grammatically challenged, there are a few factors that save from too much embarrassment:

I’d like to highlight an example that failed all three, is possibly the most common misspelling of all time, yet is one I’d never seen or heard of until the other day.

I was recently working on integrating PaperCut’s Payment Gateway Module with the Barclaycard ePDQ CPI service, allowing students (or others) to transfer value from their bank or credit account into their PaperCut account, which they can then use in addition to any print quotas they receive.

One of the security features of the Barclaycard service is to only accept connections from users who have been redirected from a particular URI. This is a feature of HTTP called the referrer URI - our web browsers tell the web page we are visiting where we just came from. This information is valuable for web masters to understand where their viewers are coming from. In this case, only accepting users who have come from a particular URI prevents a malicious site trying to make use of the service.

During development, this turned out to be more of an annoyance than anything. Luckily, there is an easy way to set/fake the HTTP referrer URI in Java: urlConn.setRequestProperty("Referrer", "http://my.allowed.url/");

Something was wrong though… the above line didn’t seem to be working, or at least Barclaycard was still refusing my connection. Perhaps I spelt it wrong? A quick search in an online dictionary confirmed I’d spelt it correctly. But wait, what was the next entry?

A misspelling of “referrer” which somehow made it into the HTTP standard. A given web page’s referer (sic) is the URL of whatever web page contains the link that the user followed to the current page. Most browsers pass this information as part of a request.

(from the Free On-Line Dictionary of Computing)

Well that was a surprise. Not only did someone misspell the word when formulating the standards document and possibly fail to run a spell checker, but supposedly there was no-one amongst the committee or technical consults that successfully recommended a correction. What a colossal screw up. Even the official HTTP/1.1 specification has this to say:

The Referer[sic] request-header field allows the client to for the server’s benefit, the address (URI) of the resource which the Request-URI was obtained (the “referrer”, although header field is misspelled.)

So, given that HTTP referrer URI is used every time any person clicks a link on the internet, I’ll vote it the most common misspelling of all time.

On the flip side, as Chris pointed out, this misspelling has saved the world a whole heap of bandwidth: 1 byte for every link ever clicked! 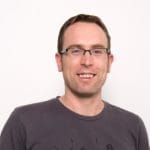 Tom’s a senior software developer who sits at the heart of the product development team with his earphones in. What’s he listening to? Cheesy scandinavian power melodic metal of course. What else? His claim to fame (outside of his music choices) is that he’s PaperCut’s first employee. What keeps him here? He loves that the company genuinely cares about customers and their experience with the software. Tom reckons he works with a bunch of smarties (not M&Ms) and enjoys having thought provoking conversations around the coffee machine.