Upgrade Automation: Putting it all together 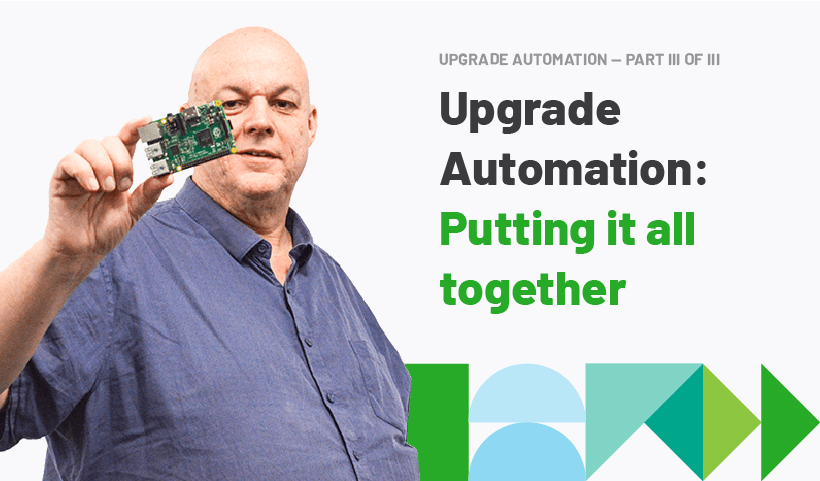 This is part three of a three part series exploring how to automate the experience of alerting your sysadmin that PaperCut MF has a new version available:

PART 2 - What’s the latest and greatest release of PaperCut MF? - Alec explains how to identify the most current PaperCut MF release version available

In the previous two posts in this three part series, we discovered:

Now we need to tie it all together so that a review ticket gets assigned to the correct application administrator for action if a new release appears.

Unfortunately, it’s not as simple as just comparing the two numbers we get every week to see if a release is available. (Once a week seems like a good interval to check for new releases, but you may prefer something different)

It’s more than likely that, in the normal course of events, we might wait more than a week for a suitable upgrade window (unless there was a critical security or bug fix). It would be tedious to keep getting the same reminder repeatedly over the ensuing weeks.

For example, using the Dash shell:

If the LAST_VERSION_CHECKED is not equal to the CURRENT_RELEASE, then we can check the CURRENT_RELEASE against the INSTALLED_VERSION to see if an upgrade is possible. It’s possible to argue this check will generally be redundant, but I think it’s better to be sure:

All that’s left now is to create a job ticket that ensures the new release gets reviewed and hopefully scheduled.

As a further service to our colleagues, we can add a link to the release notes in the ticket as well. For that, we need to extract the MAJOR, MINOR, and FIX numbers from the CURRENT_RELEASE:

The PowerShell version looks a bit different. See below for further details.

For this example, I am going to create tickets in a GitHub repository, using the gh CLI tool. Of course, you should integrate with your own work management system. But in case you’re curious, here are the details (again the PowerShell version is a bit different – see below).

The gh command needs an API token that can be stored in a file and passed via an environment variable:

Passing environment values to commands in PowerShell is not quite so elegant, but upcasing strings with ToUpper() is easy:

(I also had to convert from System.Version to System.String using ToString(). More on that below).

Now we have a shiny new ticket to review:

And finally, don’t forget to update the LAST_VERSION_CHECKED!

See below for the PowerShell version.

You can find the examples at https://github.com/PaperCutSoftware/PaperCutExamples/tree/main/mf-automation

I’ve tried to make the examples as simple as possible, whilst being fully functional. As a result, there are some things that should be done, and things that could be done, when using this approach.

There were a few details I skipped over in the example snippets above:

Revisit the first two posts in this series:

Alec (a.k.a. the API guy) is our resident IT geek with over 30 years in the industry. He was around before floppy disks or mice were a thing.