“A mathematician”, according to the late Hungarian mathematician Alfred Renyi, “is a device for turning coffee into theorems”.

Seems like good old Alfred knew a thing or two about intellectual work. He and colleague Paul Erdos of Erdos number fame were known to consume copious amounts of the stuff. With work at PaperCut occasionally requiring a brain cell or two, it is no coincidence that the location for PaperCut’s R&D facilities was chosen to be in close proximity to a strategic source of this magic potion that fuels all activity in making, supporting and maintaining Print Control Software: Cafe Vermeer. 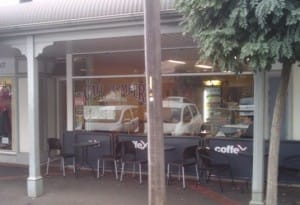 Not officially on PaperCut’s payroll due to the secretive, high priority nature of their mission, Cafe Vermeer’s Rosalina and Eric are on stand-by 8 hours a day wielding advanced machinery to whip coffee beans into a state consumable by PaperCut’s demanding and discerning coders should their BCC* drop below minimum comfort levels. Caffeine demands tend to culminate in twice-daily coffee pilgrimages, mid-morning and mid-afternoon, although a debate on whether coffee should be consumed French-style right after lunch or English-tea-style later in the afternoon has been causing a division in the office population along lines of provenance (Being of German origin, I subscribe to the former).

Haunting memories linger at PaperCut from when Vermeer was closed for a day forcing the indignity of sourcing second-tier material from so-called ‘other cafes’ in the area. This shows that the consistent quality of the caffeinated and the occasional cocoa-flavored beverages fabricated in Cafe Vermeer is a secret ingredient in the consistent quality of PaperCut’s software and support. So is their effort of maintaining the coffee preference chart mapping our developer’s names to their default coffee order so one can stay focused on semantics of the ‘volatile’ keyword in Java version 1.3 which …. ah but this story will be told another time.

So what about the 21st century corollary to the mathematician coffee thesis: “a software developer is a device for turning coffee into code”? Were our Hungarian mathematicians alive today, they would surely agree.